The Jungle Book
Simba the King Lion
Simba Jr. Goes to N.Y. and the World Cup
Winner and the Golden Child

The character from the original 1894 novel by Rudyard Kipling

Protecting the jungle, Simba and his friends, soaking up the heat

Kaa is one of the main and supporting characters of the Japanese anime series, The Jungle Book and the three Italian animated series, Simba the King Lion, Simba Jr. Goes to N.Y. and the World Cup and Winner and the Golden Child.

In the anime series, he is a very wise, yet short-tempered rock python snake and one of Mowgli's friends. He also serves as a teacher to Mowgli on a few occasions, teaching him about animals who flee from drought and showing him how to defeat the invading Dholes by luring them over Bee Rocks. He is feared by a large militia of monkeys due to his short temper, as seen in the twenty-eighth episode, A Mother's Determination.

In the three animated series, Kaa is an ally and loyal subject to Simba and his friends along that forms a friendly group that takes particular care of him. He had helped him, Baloo, and others many times. One time when the monkeys, allied with Shere Khan, were pursuing Simba, Buckshot, Winner, Thin and XL, his added intervention proved creative and extremely effective.

In the twenty-first episode, Kaa Changes His Spots, he also has his own ancient temple where he can shed his skin like 200 times.

Even though that Kaa's nature is to swallow prey, though if he can discerns that an animal in his path, he is kind-hearted, very wise, yet short-tempered, and angry. Though he has become, perhaps a bit cowardly, in the end he always acts for the well being of others. Like Baloo and Bagheera, he does get very protective and serious whenever his friends are in a bind.

In both the three animated series and the anime series, Kaa is a slender Indian rock python snake with brown with golden spotted scales and white eyes with drop-like irises.

On a number of occasions, in the anime series, he has powers including hypnotism, constriction, and camouflage. Also in the animated series, he extends his very long body in a way that allows Simba and his companions to cross gaps, much like a bridge.

Role in the Series

Much like Bagheera and Baloo, he was one of the guardians and mentors to Simba and Buckshot.

In the thirty-fifth episode, Traitors, after Shere Khan chased the heroes through the Savannah, Kaa has enlisted help from the Cobras. Unfortunately, their second leader, the vengeful White Cobra, has committed treason as revenge for accusing him on killing his brother, the King Cobra. After Winner snapped Kaa out of his hypnotism, he constricted him, and Simba banished and exiled them from entering the Savannah.

After the war with Shere Kahn he became one of many loyal subjects to the new King Simba.

Simba Jr. Goes to N.Y. and the World Cup

After Winner got captured by humans and was taken to NY, Kaa was part of the rescue team along with Simba, Buckshot, Bagheera, Baloo, Flash, Canary, Ludwig, Augustine, and Thin and XL. He was later rescued by his daughter and her friends.

Winner and the Golden Child

He was one of the numerous animals who trains the boy of the Fifth Prophecy, Ari, while hiding him in the Jungle from the evil sorceress, Maya. Some of the things he teaches him include camouflage and hypnotism; to which he was unable to mesmerize Ari and had his powers reversed onto him and the other animals surrounding them.

When Shere Khan returned, he knew Ari's best chance was within the Singing Valley where he could develop his talents. He later became a watchful eye over the vicious tiger, along with Cricket, and even saved a sick Fox from the rain when his disguise wore off. His camouflage made him undetected and there were some rumors of an imposter posing as Fox, which later turned out to be Vegan/Kurdy.

After that, he got involved in practicing for a soccer match against Shere Khan and Maya, as a way to wage war against Ari. He was once a team member of the Jungle Team but during the preliminaries, he was disqualified after tripping a player as he wrapped his tail around its legs. Nevertheless, Ari won over Khan as he transformed Maya permanently into a vulture. He and his son can still visit the young prince after he fulfilled his destiny and was able to warp his home into the Singing Valley. 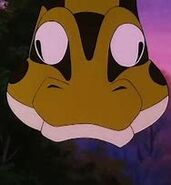 Add a photo to this gallery

Retrieved from "https://mondo-world.fandom.com/wiki/Kaa?oldid=11023"
Community content is available under CC-BY-SA unless otherwise noted.